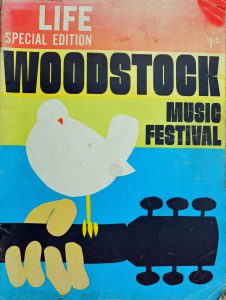 In celebration of the 50th anniversary of the Woodstock Music Festival we’re taking a trip back to the 1960’s.  Shayna Manheim, a Willow Valley Communities’ resident, remembers Woodstock in 1969. This is her story.

I was born in the Bronx but grew up in Swan Lake, a sleepy little hamlet in upstate New York. It was a three-hour drive from New York City, or from Albany, where I went to college. It was August of 1969, and the summer session just had ended. I remember arriving back at my duplex slum apartment after my last final exam, when the phone rang.  It was my mother, who said “Come home.  Now.”  Then she hung up.

Still a bit disoriented after several near-sleepless days, but alert to the urgency of the situation (whatever it was), I phoned my good friend Roy, who was a student at a nearby college.  Roy was a ROTC Marine who had distinguished himself by flunking into school.  He was terrified that the Vietnam War would end before he could graduate, receive his commission, and go overseas to cover himself with blood and glory.  Roy had a soft, albeit fraternal, spot in his heart for me, and a reliable Corvair Monza.

He arrived at my doorstep in record time, and we were off, complete with a full gas tank, a trunk full of luggage, and a bayonet which Roy had stowed between the bucket seats, just in case he had to defend me against anything.

Several hours later, just a few miles from our destination, we found ourselves in the middle of the worst traffic jam ever.  It was clear that no movement would take place in the foreseeable future, so we got out of the car and asked someone where everyone was going.  “Don’t you know?” he responded. “We’re all on the way to the Woodstock Festival.”  Entirely wrapped up in preparations for our finals, Roy and I had been oblivious to the outside world.

We pulled the Monza off the road and, laden with my luggage and secure in the knowledge that Roy had his bayonet readily available, we walked the rest of the way to my parents’ place.

Did I mention that my family operated a grocery store near the festival site?  My parents had stocked the place in anticipation of the increase in business, but nobody had expected such huge crowds. It seemed like everyone wanted food, so my parents kept the store open for the duration of the festival.  Roy posted himself at the door to control the number of people entering the store at any time.

The festival ended, and everyone went home, including Roy and me. Regrettably, I gradually lost contact with him.  I guess our lives took different directions–he finally graduated and was sent to Vietnam, while I stayed in Albany and protested his being there. I hope that he survived his experience, and cherish the memory of him, the Monza, and that bayonet.

I never got to see any of the Woodstock festival because I spent the weekend working in my parents’ grocery. For the locals, it was just a deluge of people, rain, and confusion.  The roads were impossibly congested, so life as they knew it came to a halt.  Even the passage of decades did not appease their wrath. Most were huffy about the inconvenience, but, no matter what was reported about opportunistic area businesspeople, nobody made a fortune selling food or renting their lawns for parking spaces.  I know that my parents did not jack up their prices, sell water from the bathroom tap, or send anyone away hungry.

For months after the festival, the locals still showed symptoms of shell-shock, and Max Yasgur’s farm remained a churned-up expanse of mud and garbage.  By the time I next visited Swan Lake, it seemed that the sleepy little village largely had returned to its natural state, but even then some evidence of Woodstock remained. Like the intricately-wrought brass item sitting in my parents’ living room.

“From one of the kids from the festival, “ she responded.  “He traded it for some beer.”

“…and what are you planning to do with it?” I asked, as diplomatically as I could.

“…and what am I supposed to do with it?”  By that point, I was having trouble keeping a straight face, especially as I admired the ripples of color in the hand-blown glass bowl.

“Why, you should use it for the purpose for which it was intended” she responded. “It’s an incense burner, isn’t it?”

She nodded and walked away, smiling and fluffing her hair, secure in the knowledge that she had done something nice for her difficult daughter.

The “incense burner” was given a place of honor on the mantel, where nobody entering my apartment could miss it.  It seemed that everyone who saw it said “Hey, that’s really cool.  Where did you get it?”  My response was inevitable. “Oh, that?  My mother gave it to me.”

Thirty years after the festival, some friends and I drove to Swan Lake to prepare my recently-deceased parents’ house for sale.  May and Alexandra operated an informal organization called the “Panic Moving Service” (for which they distributed red baseball caps with “PMS” printed on the front), which provided help to women who quickly had to leave their current abodes.  The PMS also offered free furniture and furnishings, as available.  My parents’ house was a gold mine for well-intentioned pillagers, and we easily filled a truck.

Since we were in the area, I thought it would be fun to show them where Woodstock had taken place.  I knew the location, of course.  On the way there, though, I saw a guy, presumably a local, walking on the roadside, and asked him for directions, just to see how he would respond.  Nice guy that he was, he told me where to go—and it was nowhere near the festival site.  Old, festering grudges heal slowly, and I guess giving wrong information was fun if you still rankled over the packed roads back in 1969.

Back to preparing the house for sale.   While I was going through my father’s dresser, I found a small handgun buried in his underwear.  I showed it to Alexandra and May, both of whom were fluent in weaponry.

“Yup,” one of them responded.

“I don’t want it—you got any ideas for what I should do with it?”

I’m not sure where the gun came from, though I suspect that my mother took it in trade for groceries or beer.  Nor do I know for sure what happened to it after my friends took it.  Frankly, I just had wanted it to disappear, and it did, so I wasn’t going to ask any questions.  In any case, I’m confident that, wherever it may be, it is registered and owned by a responsible individual with the proper permits, and used only in a manner that is in every respect consistent with the law.

I don’t know what happened to the, uh, incense burner, either.   It’s probably sitting on some kid’s mantel, waiting to be admired so the current owner could say “Yes, it certainly is an interesting item. I heard that an earlier owner got it from her mother.”

You never know what to expect.  You just never, ever know.

Shayna Manheim was born in the Bronx.  She earned Bachelor’s and Master’s Degrees in Education from the State University of New York at Albany.  She remained in the Albany area working for New York State government until retiring to Lancaster County, Pennsylvania in 2006. She lives at Willow Valley Communities with her husband, Alan Manheim, their spaniel, Dawg, and their rottweiler, Hundt.  (FYI:  Hundt and Dawg are stuffed animals.)

To discover more about Willow Valley Communities, call us today at 877.503.0774. Be sure to ask us about arranging your own personal appointment or call to reserve your place on our next tour.

Read another story about Woodstock by a Willow Valley Communities resident here: The Summer of 1969 – The Best Time Ever!