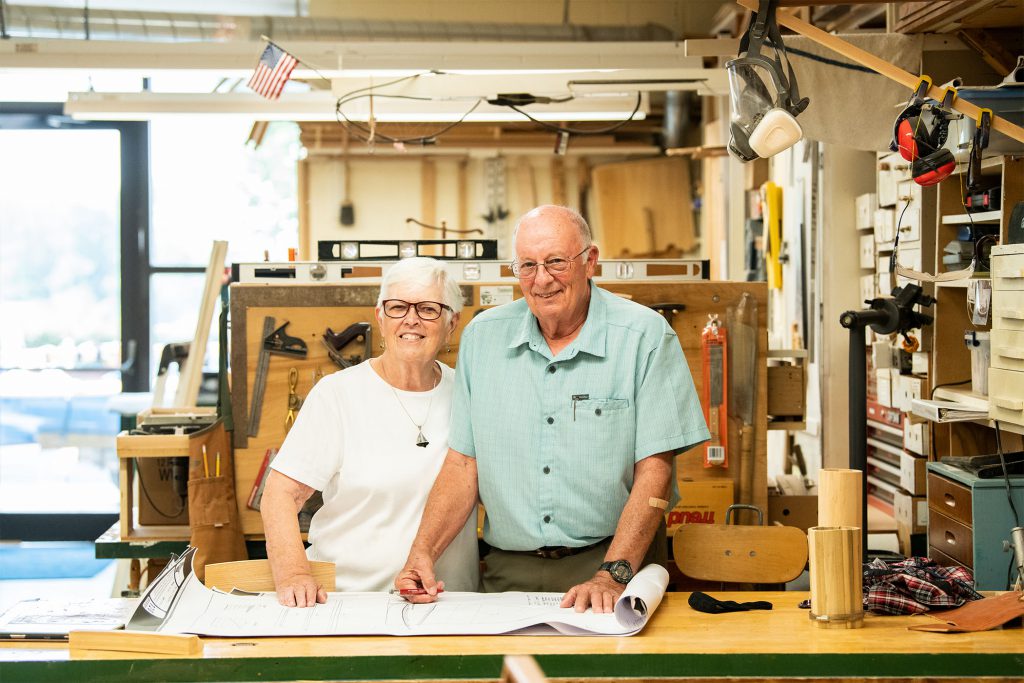 Resident George Myers says two of his longtime passions are sailing and woodworking. Years ago, he found that participating in either one of those pursuits, with companions or in solitude, would relax him and take his mind off of his job at Eastman Kodak. And at Willow Valley Communities, he’s been able to combine those two loves — and get a lot of support along the way.

George and Carol Myers are most recently from North Carolina, where George volunteered at the Maritime Museum in Beaufort after retirement. The museum had a large boatbuilding shop where volunteers would build new wooden boats and restore old ones.
“That’s where I got the boatbuilding bug,” he remembers. Afterward, George built a pair of kayaks for his daughter and her new husband as a wedding present. He and Carol also built a solo canoe.
The couple owned cruising sailboats for over 40 years. Carol would join George on many sailing trips, “though not always willingly,” he laughs. Still, the couple sailed together on Lake Ontario, through the Florida Keys, and on the Chesapeake Bay. Twice, in 2007–2008 and in 2010–2011, they actually spent six months living on board the boat.

Carol was able to adapt to the small quarters of the sailboat and found enjoyment in exploring the many towns they would dock at along the way. However, after getting through a very nasty storm in Florida in 2011, she declared she was “definitely retired” from sailing.

So, in 2015, George decided to build a boat that he could sail alone safely. Persistence, a 16-foot Melonseed Skiff, would become his most ambitious boatbuilding project yet. He started it in their garage in North Carolina.

During this time, the couple also started to explore senior living communities. They knew they had found their new home after they toured Willow Valley Communities and our comprehensive woodshops.
“That was a real blessing,” George says. “The tools were all there; the machines were all there.”

Carol agrees. “The number one priority was the woodshops. We would never have moved anywhere that didn’t have one.”
George continued his boatbuilding project at Willow Valley Communities, in the Manor and North Woodshops. He soon discovered something else that would help him in his project: the users of the woodshop.

“There you have a number of skilled woodworkers — retired shop teachers and cabinetmakers — all with much more woodworking experience than I had, all available to help me solve any problems I encountered,” George says. “I’d sit there puzzled about something. All I’d have to do is ask the question, and all of a sudden I’d have two or three great ideas that I’d never have thought of.” He adds, “That was a big bonus to moving here to Willow Valley Communities.”
After what George estimates as “thousands of hours of work,” the day came to launch Persistence for the first time. Carol remembers fondly how other Residents joined them at the Muddy Run Reservoir launch ramp. Members of the Willow Valley Communities Bike Club (George is a member and past president) even biked to the site.

“There were about 20 of our friends from Willow Valley Communities who came,” Carol recalls. “They brought food, and it was a phenomenal celebration.” But the best part of the day? “The boat floated!” she chuckles.
George says he continues to make little enhancements to Persistence, and he’s still taking advice from his fellow woodworkers, who have become dear friends. He is also busy traveling the area discovering other waterways to sail.

“I want to really test the limits of Persistence,” George says.
Whether he sails alone or with someone else, we are sure he will.