In celebration of the 50th anniversary of the Woodstock Music Festival we’re taking a trip back to the 1960’s.  Mary Muller, a Willow Valley Communities’ resident, remembers Woodstock in 1969. This is her story. 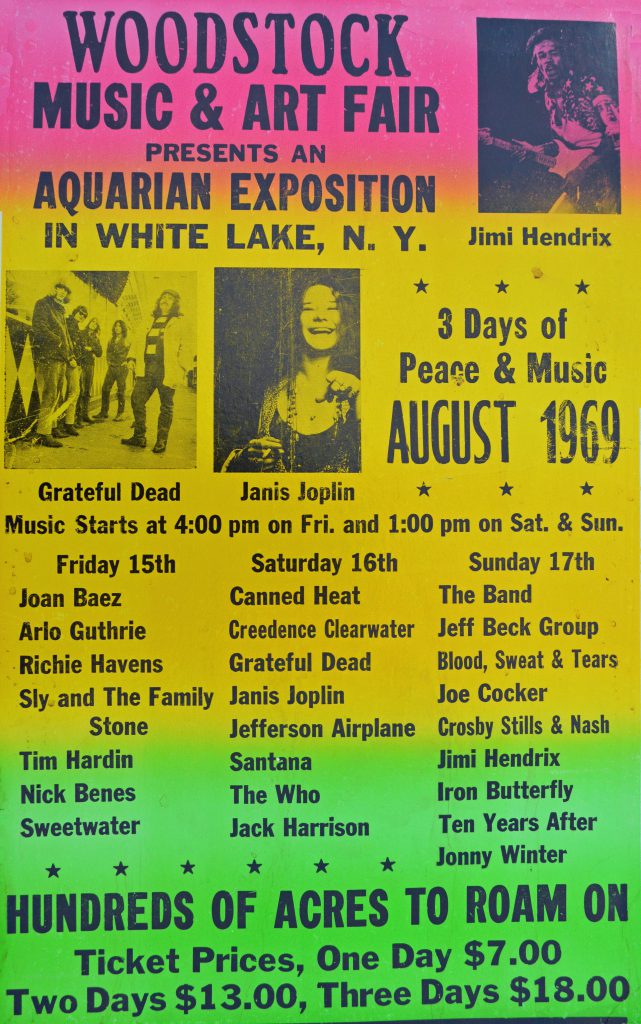 I was working full time in Manhattan, a short train ride from my apartment in Queens where I lived with my parents.  Having a little money in my pocket, I rented a house in the Hamptons on Long Island with 9 other people, which on the weekends could swell to 20 or more people, most of whom we did not know.  Better get there early if you wanted to claim a bed!

Come August, a group of us had purchased tickets to an upcoming music festival called Woodstock, to be held less then 2 hours away in Bethel NY.  A short trip up the NYS Thruway, we piled into a car and left early Friday arriving in plenty of time to stake our claim to a small patch of grass for the concert.  As you looked around, people were converging on the field from every direction so we never had to surrender our tickets because they were not equipped to handle the huge influx of concert-goers.

The music started late afternoon and the grass was becoming more and more scarce as the field continued to fill with young people.  And then the rain came!  And it continued to rain so we decided to seek shelter elsewhere for the night and return to the festival in the morning.  My sister’s in-laws had a summer cottage nearby in Smallwood NY so it was decided that’s where we would go.  Did I know where Smallwood was?  No.  Did I have an address for the cottage?  No.  Did that stop us?  No.  We drove around until we found Smallwood and if you could picture this, a group of wet, long-haired hippies, we started knocking on doors late at night in the pouring rain until we found someone who knew where the cottage was.  We arrived to fiind that a couple of my brother-in-laws’ brothers were there, so they welcomed us in for the night.

We left to go back to the concert the next morning, however, by that time, unbeknownst to us, all roads were closed including the NYS Thruway so we could not even get near the music festival.  We made the best of it and hung out with the brothers and anyone else who showed up, until the roads reopened and we could get back home on Sunday.

Mary Muller was born and raised in Queens, NY.  After meeting her future husband, Richard, on a blind date, they married and moved to Rockland County, NY (about 20 miles north of NYC) where they raised their two children.  They retired to Lancaster in 2006 and moved to Willow Valley Communities, Lancaster, PA in 2015.

To discover more about Willow Valley Communities, call us today at 877.503.0774. Be sure to ask about arranging your own personal appointment or reserve your place on our next tour.

Read another story about Woodstock by a Willow Valley Communities resident here: You Just Never Know