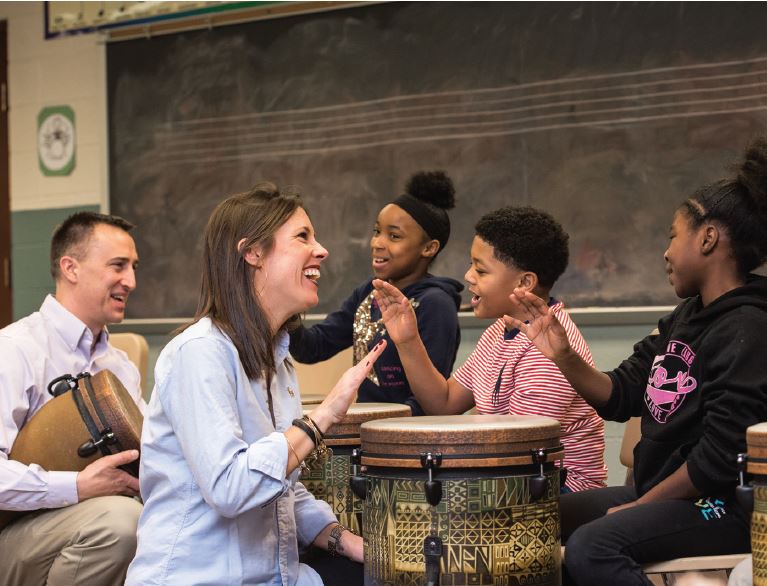 Inspiring the students of Carter and MacRae Elementary School — One note at a time, One coat at time, One child at a time.

“Before I teach them a note, before I teach them a song, before I teach them anything, I want them to know they matter.” Matt Pavelko is a K-5 music teacher at Lancaster city’s Carter and MacRae Elementary School. He and his wife, Jessica, are passionate about music education and what it can do for a child in academics and in life.  Matt says the brain processes music differently and this can help children learn other subjects. But music also gives children a positive way for them to express their feelings. And so the Pavelkos not only want children to learn, they want children to feel … to sing… and to know that their feelings matter.  Matt and Jessica say music is the universal language and it’s the one thing that everyone is connected to. And they believe that the connections that are created by music count. They explain, “There’s so much more to music than simply learning words and melodies; music has a way of awakening things in us we didn’t know we had.”

Matt started his teaching career in rural Lancaster county schools, but says that God’s plan brought him to teach in the city.  And he wouldn’t have it any other way. The move to the city, he says, made him truly develop as a teacher.  He and Jessica love the growth they’ve seen in the arts in Lancaster over the last ten years. They see it in anything artistic or creative, anything expressive; not just in the art galleries on Gallery Row.  Simple signs like the pianos in the streets from Music For Everyone. Diverse little cafes that are showing up, evening performances celebrating a group of people, like benefit concerts for refugees in different performing venues. Matt says, “It’s really exciting to be a music teacher in the city right now.”

Matt and Jessica share a passion for music education. But outside of the classroom, they take it a step further. They want to ensure that Matt’s students have everything they need in order to get everything they can out of his music lessons.  So the Pavelkos do extra things like provide transportation and meals during field trips, help parents fill out permission slips, and host Christmas parties for families.

Jessica also started a used instrument drive — which quickly expanded to include other items like coats, hats, toiletries, and more.  She has helped provide over 1,000 items for Lancaster children. “She has such a heart for service,” beams Matt.

But perhaps, most importantly, Jessica also provides a way for the children to give back with her coat drive; to not only receive, but to give and feel the blessing that comes when we give. Children can take an item, and then replace it with something else they no longer need to help another child. She explains that the drive unifies everyone with kindness and generosity. “I wanted to do something that made a difference. I wanted to provide an opportunity that would really impact these kids.”

Matt and Jessica Pavelko are helping to ensure the future of Lancaster City one note at a time, one coat at time — one child at a time. And it’s not just Matt’s engaging music class at Carter and MacRae Elementary School. It’s not just Jessica’s coat drive. It’s the way they have gone way beyond, to another level of loving service to Lancaster city children.

Matt teaches his students to feel their feelings and sing those. Jessica gives the children a new coat – and then the blessed opportunity to give their old coat to someone else. And along the way, Matt and Jessica gently enlighten the spirit of every child they meet and give them the faith that their future can be anything they want.