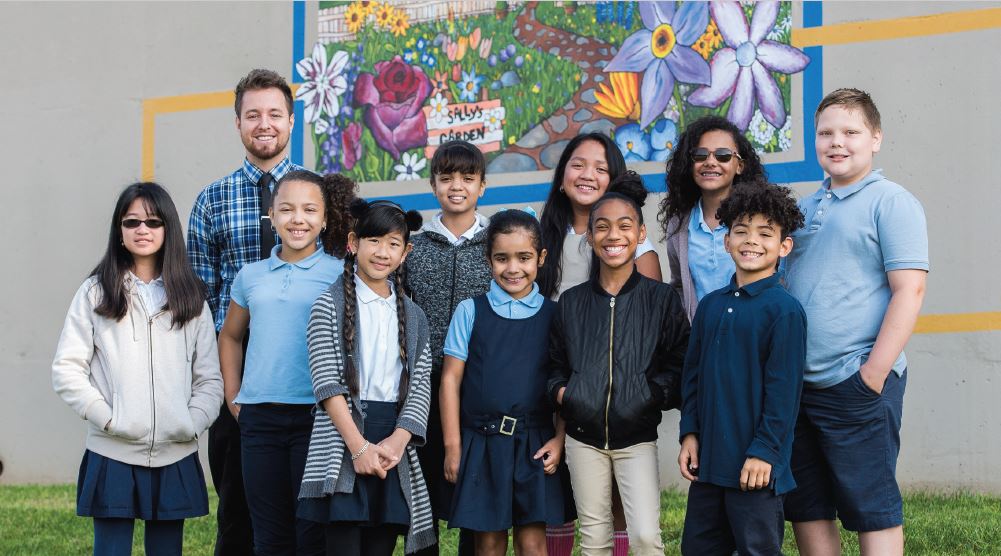 “Can We Call It Sally’s Garden?”

Lancaster’s Lafayette Elementary School in Lancaster is a beautiful, modern school that has been newly renovated. But, that wall. The daily routine for the school’s 550 students is to gather outside every morning as a school family before beginning their day.  But they always had to look at that wall.

“It was not a very pretty wall,” remembers Principal Wanda Suarez.  Broken. Defaced. Horrible graffiti sprayed all over it. That is what the Lafayette Elementary School family looked at each morning as they lined up together.

Willow Valley Communities resident, Sally Jarvis, was a volunteer academic tutor in Lafayette’s Reading Program; she, too, noticed that wall. Every week she walked into the school and passed that wall to volunteer, until one day she finally said something to the principal. “You know, Wanda, I’m tired of looking at that ugly wall. That is a horrible backdrop to your playground. You have such a beautiful building and such gorgeous kids. They deserve so much better.”

And the kids agreed. They agreed that not only they deserved better; the Lancaster community did, too. And so they got to work.

They decided that murals would make a wonderful backdrop on the wall. They would create them, one panel at a time, and create an art gallery effect. The children also decided that the theme of every mural would be diversity. Among 550 students at Lafayette Elementary, nine different languages are heard spoken in the hallways. Lafayette recently renovated its playground to be fully handicapped accessible so that all children could play together at the same time.

Looking beyond those school hallways and playground, the children also saw that diversity is everywhere throughout the rest of our world. All they had to do was look around to see it in animals, candy, sports, music, transportation— everywhere. They saw that they had limitless subjects to choose from for their murals for years to come.

Three years later, the students had helped raise $40,000 — sometimes pennies at a time — for that wall to be fixed, primed, and ready to accept their first beautiful mural. That was in 2015. Each year after that, teacher Wes Blymire’s Advanced Art class of 9- and 10 year-olds has taken over and has worked together to continue the vision and create another vibrant panel to add to the mural on that wall. The children planned on adding a different panel to the wall every year, creating a gallery effect that the schoolchildren of Lafayette could enjoy each morning, along with the rest of the Lancaster community.

The children saw what they had accomplished with that wall and they saw that it belonged to them. They saw how they contributed to the Lancaster community and they learned that when they returned to Lafayette — even for years to come — they knew they would look at it and they would see that they were a part of something very important. That’s the real beauty of this project.

Sally loved that the students were involved in the planning and creation of the murals and that they were taking ownership of the wall, now and for the future. In 2017, she passed away, but the children never forgot her love for Lancaster and her love of seeing things get better. When they set out to create their next mural, they painted one that signified another part of our world that showed diversity: a beautiful flower garden. And they decided to call it Sally’s Garden.

The art created now and in the future by the schoolchildren of Lafayette Elementary School has value for their school, future students, and for the city of Lancaster.  It’s already left its mark in making Lancaster, as well as the rest of the world, a more beautiful place.