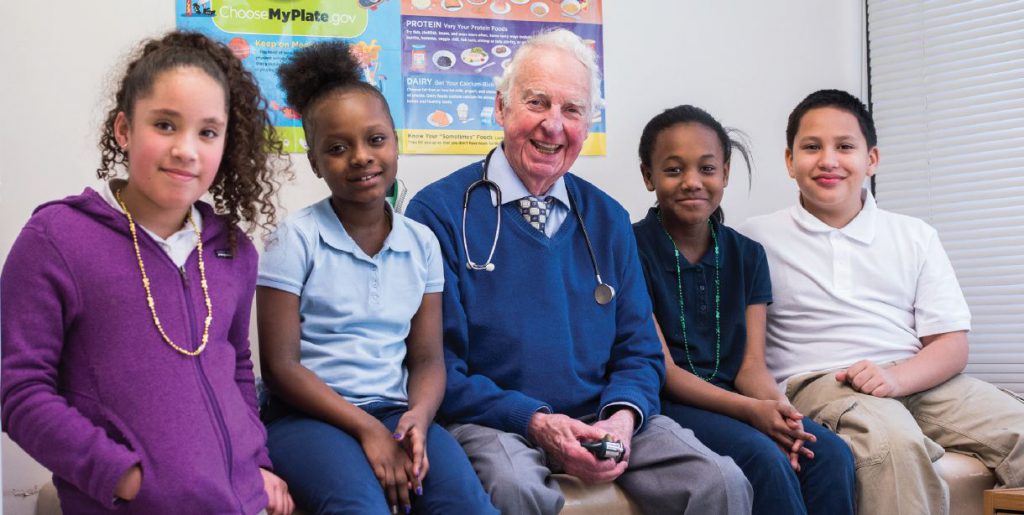 “It’s a joy to help guide the future. I give a lot, but I get a lot. It’s one of the perks of hangin’ around.”

A self-described shy guy, Dr. Clark McSparren jokes that he’s gotten to the point in his life where he is finally comfortable speaking with adults. Because, he quips, at 84 years of age, all adults are really kids to him. Dr. McSparren has been a pediatrician in Lancaster for 56 years, which means that most of his young patients are now all grown up.

But, Dr. McSparren still has plenty of opportunities to take care of and interact with young children. Two mornings a week he walks from his downtown residence to Lancaster City’s Carter and Macrae Elementary School to volunteer in the school’s medical clinic. Besides putting Band-Aids on the occasional scraped knee, he also performs yearly check-ups, treats chronic conditions, meets with parents, and teaches children about their health. He’s been serving the children of Carter and Macrae since 2003 when he answered a simple ad in a Lancaster General Hospital newsletter.

Dr. McSparren treats 4 – 11 year olds. Children at that age are “unsullied,” he offers, “still with stars in their eyes.” Chuckling, he says they are not as worldly as middle- or high-schoolers. During their time with him, Dr. McSparren’s focus is always on his patient. Even with the parents present, Dr. McSparren’s gaze never leaves the most important person in the room: the child. Parents often comment to him that they like how he talks to their children. Dr. McSparren relishes in that. And he’s also always gratified to see the spontaneous hug and kiss his patient gives his or her parents before returning to class.

But it’s not just a child’s cute innocence that Dr. McSparren admires. Far from it. He’s treated 8 year olds who have spent most of their young lives in refugee camps. They’ve come to the United States having to learn English, and act as interpreters for their parents as he explains treatment options and follow-up instructions for them. Dr. McSparren says he rejoices in the resilience of these children, and swears he can pick out those kids with just that little spark in their eye—those kids who are going to make it—and succeed, even with odds against them. All they need is just a little encouragement, he says…”a responsible adult who guides them for just fifteen minutes at a clip,” In his words. Dr. McSparren dreams that maybe sometimes that responsible adult is him.

The Greek word for doctor also means teacher, a connection that Dr. McSparren takes very seriously. He says he tries to never miss an opportunity to do a little teaching with his young patients while treating them. Teaching about their immune system, how it works, and what medicines do. He also teaches about the importance of follow-up and taking care of themselves. But he’s also quick to add that he is also still exploring and learning right along with the children. “They teach me resilience. They teach me some of that starry-eyed resilience.” With eyes welling, Dr. McSparren recalls one poignant moment with a young girl who during a conversation innocently asked him what a war was.

Dr. McSparren quotes Plato: If you don’t examine life, it’s not worth living. And he says he’s done a lot of that as he’s gotten older. He says it’s a joy to touch the future; to help it; to guide it, in his own little way. To that end, one thing he hopes to do is to continue to inspire other young doctors to also consider what their future role can be, and how they can give of their time at Carter and Macrae and other schools in Lancaster.

Dr. McSparren says if he can help the future along a little bit, well, that’s what he’ll do—invest in and help the children; tomorrow’s adults. Staying involved to see that his work is making a real difference for the future of his beloved city of Lancaster. He says that’s just one of the perks of hangin’ around.